People using Auburn, Alabama's 9-1-1 system now have the option to text 9-1-1 if they are unable to call.
Read More

That belief is even stronger today.

Baker confirmed to the Dothan Eagle Tuesday afternoon that 15-year-old Dale County sophomore Adaveion Jackson collapsed during an early morning practice and added he was “saved” by quick action from the Warrior coaching staff, led by head coach Don Moore, with the aid of an AED.

Elyse Purefoy, a rising senior at the DeKalb County high school, was a member of the school's dance team and was participating in summer training when she passed out while running on the school's track. Read more...

“The AED purchasing experience could not have been easier. I had researched various models online, and discussing my questions with CarePoint, we purchased an AED with pads, batteries, and a cabinet for our facility and had it personally delivered that day!”

V2 Composites is a manufacturing company based in Auburn, AL that designs and fabricates some of the industry's strongest and most versatile composite reinforcement solutions used in bridges, high-rise buildings, and aircraft among other applications. V2 contacted CarePoint Resources when they saw the need for on-site first aid and CPR training for their employees.
"In a facility like ours with a lot of moving components, forklift traffic, and chemicals there is nearly endless potential for an onsite accident. We have a former EMT on 1st shift and an Army Medic on 2nd, but most of our other employees did not feel knowledgeable about what to do should an emergency occur," explains Caleb Barrow with V2.  CarePoint worked with V2 to find a convenient date and time for their training.  The helpful instructors arrived early to set up for the 4-hour American Safety and Health Institute CPR AED and Basic First Aid class.  During class setup, it was mentioned that V2 was interested in purchasing an AED for their workplace.
"Our plant is in a fairly secluded location, so it would take an ambulance a while to get to us. In an emergency, especially a heart attack, when every second counts, it's critical that our entire staff be trained in administering CPR and using the AED," says Barrow. 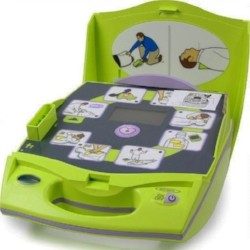 V2's Instructor helped them to choose the unit that would be best suited for their needs.  The order was placed, and by the time the on-site class had been completed, the ZOLL AED Plus had been delivered.  The ZOLL unit was selected based on several important factors: CarePoint is proud to faithfully serve clients who value the safety of their employees and patrons.  We measure our success by the confidence of those we equip.
Speaking on CarePoint's services, Barrow concludes, "My coworkers and I feel much better about our chances of survival should the worst happen now that we have the AED on site, and the knowledge to properly use it. I would recommend CarePoint's services to anyone seeking to improve their medical emergency preparedness."
Read More

3 Essential Questions When Considering An AED 17

Why would I consider an AED for my organization?

AEDs save lives. Every day in the United States, over 1,000 friends, co-workers, and loved-ones develop a life-threatening condition called Sudden Cardiac Arrest (SCA). When used within four minutes of SCA, an AED can produce survival rates of up to 85%. Sadly, due to a lack of readily accessible AEDs, the current survival rate is only 8% to 10%, leaving over 900 families each day wishing an AED-equipped bystander could have intervened.

Organizations provide an optimal environment for effective AED programs. The workplace is second only to the home when it comes to the most likely places to witness an SCA emergency. According to the Society for Human Resources Managers, “All work sites are potential candidates for AED programs to increase the chances of survival of those who suffer Sudden Cardiac Arrest.”1 With minimal consideration and planning, an organization can be in a constant state of readiness to provide the best response to an emergency that happens over 1,000 times a day.

Tip: Don’t think, “It will never happen to us.” Instead think, “Thank goodness it hasn’t happened yet!” Read this report where an AED was used to save someone’s life just 30 minutes after it was placed.

What are the legal implications of establishing an AED program?

Indifference invites risk. Because of the effectiveness of AEDs to treat SCA, the vast majority of cardiac arrest lawsuits result from either a failure to make an AED available to employees and/or patrons, or a failure to use an available AED. As of yet, no lawsuits have been filed in an incident where an AED program was used in a timely manner. Richard Lazar, an attorney at the forefront of AED law explains, “In general, businesses that implement AED programs appear to reduce the risk of liability for Sudden Cardiac Arrest lawsuits as compared to businesses who do not.”2

Is an AED program expensive?

In a word, Yes. With entry-level units in the area of $1200, cost can sometimes be a limiter. There are also short and long-term expenses involved in establishing and maintaining an AED program. One study found that as many as one out of every five accessible AEDs would be ineffective during an emergency due to a simple lack of routine maintenance.3 A reason for this may be a misunderstanding regarding future costs on the purchaser’s part.

Plan beyond the initial purchase. Some organizations only consider the initial cost of an AED when choosing an appropriate device. Instead, organizations should take into account the lifespan of the consumables such as batteries and pads. It is wise to take into consideration that some manufacturers’ consumables have a longer service-life than others. A good practice is to calculate the total investment in a unit over a 10-year life expectancy. Other important costs, such as initial and refresher training for anticipated users should also be included in a program budget.

Tip: Where there is a will, there is a way. Even the smallest organizations have successfully deployed AED programs utilizing fundraising, grants, sponsorships and financing to reduce the financial impact of providing access to AEDs.

Understanding The Chain of Survival 1

The Chain Of Survival

Developed in 1991, the American Heart Association "Chain of Survival" is a series of interventions which, when implemented in a timely manner, can greatly increase the potential for survival of Sudden Cardiac Arrest. Since it's inception, the "Chain of Survival" has gone through several iterations.  Currently, there two main chains based on whether the arrest occurs outside the hospital or within.  The most comprehensive version is the Out-of-Hospital Cardiac Arrest (OHCA) Chain of Survival.

The OHCA Chain of Survival consists of five links beginning with bystanders and being completed by healthcare providers:

Recognition and Activation of the Emergency Response System

Quickly activating the Emergency Response System when cardiac arrest is suspected literally puts the wheels in motion toward giving the victim access to definitive care.

Starting High-Quality CPR immediately re-introduces life-giving oxygenated blood-flow to the vital organs, particularly the heart and brain.  High-Quality CPR can allow the heart to be in much better condition for a defibrillation shock than if CPR is not performed.

The moment a heart transitions from an organized heart-rhythm to a disorganized rhythm, or fibrillation, seconds truly matter.  Each minute that passes reduces the chance of a successful defibrillation shock by 10%.  AEDs, or Automated External Defibrillators are becoming increasingly available both in-hospital and to the public.  A realistic goal for rapid defibrillation is three to four minutes from the time of collapse.  This is why the American Heart Association recommends people who have a responsibility to respond to a cardiac event have an AED available within 1 to 2 minutes from their location.

The return of a spontaneous, organized heart-beat is not the end of the chain.  The ultimate goal for a victim of cardiac arrest is neurally-intact discharge from the hospital.  To help achieve this, advanced post-arrest interventions with induced hypothermia, medication administration and support of basic vital signs must be employed.

Where Do I Fit Into the Chain Of Survival?

During Out-of-Hospital Cardiac Arrests, the best chance of survival rests in the actions of the bystander, who is typically a lay-provider. Lay providers are capable of calling 9-1-1, starting CPR and using an AED to deliver a life-saving defibrillation shock.  The quick actions of a bystander can increase the chance of survival up to 3-times more than that of EMS who typically arrive 6 to 10 minutes after collapse.

Healthcare providers may find themselves entering at any point in the chain.  This is why it is important for healthcare professionals to be versed in bystander CPR as well as Basic and Advanced Life Support.